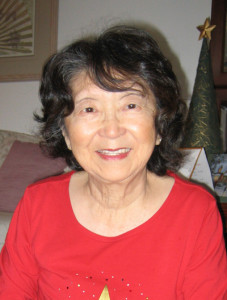 I remember that when we were to “evacuate” from Royston [Vancouver Island] you could only carry maybe two or three pieces of luggage for the family. It was my father, mother, and six children including me. How could you take all that you need in only three suitcases? But that’s what we were told we could take and that we would be returned home after a few weeks after staying at Hastings Park. We believed them. We carried a little more than a few suitcases because it wouldn’t hold that much.

We couldn’t go to school. The teachers were told not to teach us. Leaving my friends, like my friend Florence Clark, was upsetting. Her name is Florence Bell now. We’re still good friends today. We had to leave our house and everything behind including records and our record player. They took our cameras, dad’s rifle, car and truck. My brother George was playing and the RCMP wanted his toy gun. My parents showed the RCMP it was just a toy, but they took it away. The windows were boarded up, but we heard that after we left, people pulled off the boards and went into our house and took our things. I was young, but I remember hearing the stories.

The food was horrible at Hastings Park. You had to line up near the fence with a tin plate in hand. It was a long line up. All these [Caucasian] people in the street cars would stare at us while we were lined up. It was horrible. They gave us cold porridge. It was hard and lumpy. I didn’t eat any of it. So after the first morning we didn’t go back for breakfast. My mom used to go to a small store nearby. She used to buy us an orange and a doughnut. We used to eat that for breakfast. We never got sick so I guess the vitamins in the orange helped. Mom used to take a street car to Chinatown. We kids stayed behind at Hastings Park. She would come back with a couple tins full of noodle soup with barbeque pork and a head of green lettuce. My friends used to come over when she returned and she used to feed them the fresh lettuce too.

The beds were all in lines. The women put up cloth to provide some privacy. Only women and children could stay in that building. Dad stayed in a different building. There was a bunk bed. We left Rosie on the bed. I don’t know if it was Edna or me who was supposed to watch her, but Rosie the baby fell on the concrete floor. My mom was mad. Rosie was okay but she was crying. The building smelled like a barn. Animals had been in there. We had to stay there. You could smell manure.

It seemed like mom was washing every day. There was a clothes line outside. Mother washed our clothes and put it out on the line. Sometimes some of our clothes were gone even the panties. I think there was a public bath in Vancouver. Kids had to go with the adults. Mother paid for us so we could take a bath.

We had to go to another building, maybe the Auditorium, to learn, but I don’t remember learning much. We had two bracelets, sterling silver, half an inch wide cuff bracelets. Uncle Fred bought it for me and Edna before we went to Hastings Park. We took it off because we wanted to play. We left them on our table. Someone stole our bracelets. Someone took them. We never saw them again. We played with the other kids inside. I could see the other mothers were often in tears. I guess because they were worried not knowing where we would end up.

My dad was born in Cumberland, B.C. and he spoke English and Japanese. He was a foreman for the building where the women and children stayed. He used to keep track of when people were moved out and when the beds and areas needed to be cleaned or anything needed to be fixed. We were one of the last ones to leave. My dad heard that Slocan was filling up and he didn’t want to go to Alberta to the sugar beet farms. We were small kids and we couldn’t work on the farms.

In Hastings Park there was a plaque with the names of everyone who stayed there. I don’t know if that plaque is still there. It shouldn’t be taken off. It should still be there. It had my name, Edna’s, George’s…. It should show who stayed in Hastings Park. I would never want to see any people, it doesn’t matter their race, to go through what we went through. We didn’t throw a bomb at anyone. We didn’t kill anyone. We were Canadians. We were born in Canada. I would never want to see this happen to any other people.