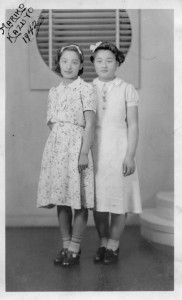 I was twelve, that’s when the war started… It was Sunday, December 7th 1941 and my Mother and Father were worried that Japan bombed Pearl Harbor, what’s going to happen to us? And I said, “I’m Canadian, I’ve got nothing to do with that.”

On Monday, when I went to school, everything changed. The parents told their kids not to associate with the Japanese kids, so they all turned their back on you. In December my Father’s boat was taken away. He was sick so his friends got together and pulled it over to New Westminster where apparently it sunk not too long after.

The order came in…towards the end of February, to get ready. Just one suitcase per person. We were poor so we never really received any kind of toys. I wanted to take my one and only doll that Dad bought for me one year. But Mom said “No, pots and pans are more important.” So I put my doll up in the attic. It was a cute little plastic doll with short brown hair. Of course we never did get back to it. But our house is still there.

We were taken to the Ganges Harbour and from there got on the steamship and then headed out to Vancouver and then we got on a bus. We stopped at Hastings Park – Dad and my older brother were dropped off at the Agrodome Building and my sister, Mom, me and my two younger brothers were taken to the barn. Men were still putting straw into the bags to make our mattress and when we walked in the place was still a mess. The place was still scattered with debris and there was no toilet for a while. Then they put an apple box in front of the animal drinking trough and you had to go and squat over the box. My sister and I giggled so much that we nearly fell in there. And there was no privacy, just a single curtain.

There were a lot of bugs all over the place so once a week or once every other week a maintenance man would come around with DDT, a can of DDT. And they sprayed the mattress and the bed and all the area, and we sleep in that. Can you imagine? That we’re still alive? Because DDT was supposed to be hazardous wasn’t it? We brought sheets for our mattress, and then we had one blanket that the government let us have you know? And then we had more sheets or blankets so put around the bunk. When you get on top you could see everybody and I made a friend and I remember folding up a paper airplane and putting a note in it. We were sharing the barn with the cute flying birds, and they would poo on our beds. Had to clean our bed up before we go to bed. 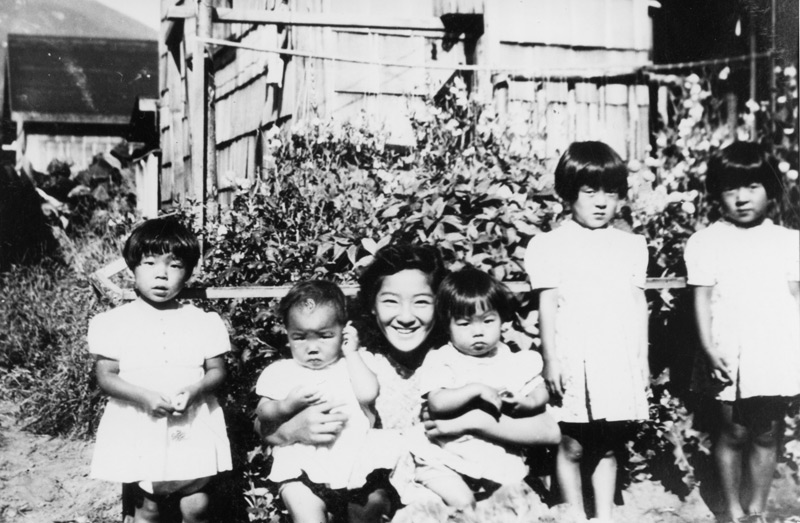 The worst time I spent in Hastings Park is when I got the mumps. They had to segregate us for ten days so they put us in a dungeon – the underground animal feed storage area with no window or anything. On the one side there was a coal chute. They put a number of beds in there. And it was okay for me because I was twelve years old, but there were a lot of five, six, smaller children crying for mommy, and mommy was not even allowed to come in because she might take it out and spread it. The nurses came around, but not that often, not at nighttime anyways. The older girls used to take the babies into your bed and sleep with them, and keep them from crying. So during the sick time, we were babysitting. The only light from outside came through the small round coal chute. So I used to stand up to see if I could see my family walk past. Another thing that happened during my time there was my oldest sister who had one daughter two years old, she was expecting, and in June she started to go into labour right in the bunk. The doctor couldn’t come right away. I remember my Mother sitting there and saying, “Emiko, push, push.” You should see all the girls gathered round peeking in watching a baby being born. Then I heard Mom saying, “Emiko, it’s a girl!”

Three times a day we left the dormitory and walked across the pavement to the mess hall. Food wise, I don’t know why they didn’t serve us rice but there was stew and baloney and things like that. A lot of stew, different kinds of stew, you know? But Japanese being not used to things like that, they were craving for rice and you know. I remember one man was very angry with the food he was getting and he was complaining, complaining, and screaming away. And he got detention from the RCMP for that.

My uncle, Masa Ohara, took my sister and I out one day. I remember my uncle getting us the pass. We went to Army and Navy, and he bought us shoes. And then to Woodwards, and he bought us nice dresses. Then he took us to this Chinese restaurant on Powell Street called Fuji Chop Suey. It’s the first time that I ever had chow mein and it was so delicious! I’ll never forget. Finally he took us to Fujiwara photo place on Cordova Street and had picture of us taken. That was the only time we were taken out and we were treated – it was just wonderful.

I remember looking through the barbed wire at the PNE playground, wishing I was on the other side. It really was something to look at – we never knew such a thing existed. I experienced school for maybe one or two weeks – there’s only about maybe ten, fifteen of us – and one teacher trying to teach us something, but we got very little out of it. There wasn’t much to do except we made friends and they signed my autograph albums. I wasn’t aware of any church or sports or activities for us. Mostly I was busy looking after my sister’s little girl. She just clung to me and I enjoyed it very much. My younger brothers were usually outside playing.

Mother was always telling us, “Go out and enjoy yourself. Don’t worry. I’m looking after everything.” So she took the worries away from us and never really showed us what the difficulty was. We were not a wealthy family so we were able to adjust. It’s a true story. With eight kids and Father’s the only one fishing, and he liked to drink and all that so we were not rich.

Dad was very quiet. He was very upset about his fishing boat being taken away. He was still active and able to move around in Hastings Park but I think he knew he was going to die. He would come to visit the Livestock Building and we would sit and eat the cantaloupe or watermelon that we bought, things like that. There was very little space to socialize except for sitting on the bottom part of the two-tier bunk bed. He never got hospitalized but in Lemon Creek, he passed away on December 1st. We got there in September.

Mother was very social, so she talked to everybody, and she learned from her grandmother how to be a masseuse. People gave her 10 cents or 25 cents for that, and she kept that up all through Lemon Creek days. She saved all that money and put it in a can and before we went to Japan she bought a sewing machine to take with her. That saved our life in Japan.

It was very noisy, just people talking, talking, talking. And kids were crying. Luckily it didn’t disturb me and I slept well. Our bed was slightly slanted because of the trough in the middle where the animals would pee. We each had a pillow and one grey blanket that they handed us when we arrived. The mattress was made of straw and squeaked. And there were bugs. Maybe bed bugs – I got bitten.

I don’t look back with bitterness. I’ve learned a lot from it and I don’t talk to the kids to be angry or bitter about it. Most of us survivors didn’t want to talk about what happened. But I started thinking about it when my kids were born because I thought we have to teach our young people, leaders of tomorrow, what had happened in Canada so it won’t happen again. Hate is an awful thing. We live in a nice country. We have to keep Canada a nice place.

Excerpt of an interview done March 28, 2013. Complete interview is available at www.nikkeimuseum.org