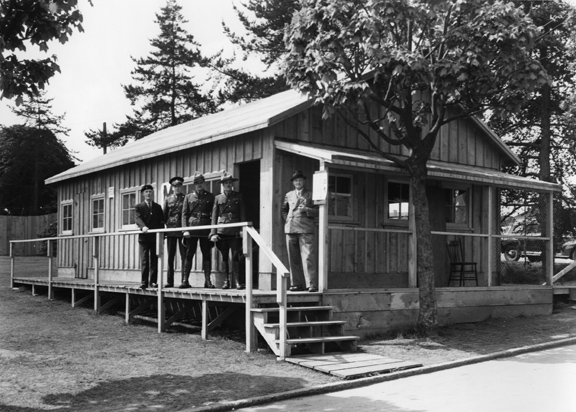 Building M – Royal Canadian Mounted Police were stationed at Hastings Park. There was no barbed wire but high fences surrounded the grounds. Day passes could sometimes be signed out at the Guard Room.

There used to be a Mountie office/guard house…There’s a front entrance to coming into the park and along the side of the road there’s another entrance for trucks bringing supplies and things… So they built a guard house right there, so anytime a truck or something came in they could stop them to see what they were bringing in or taking out… Right behind the building was a wire fence. Between the guard house and the fence there was a space about this much [about two feet], just enough for the guys to squeeze into. Well somebody cut a big hole in the fence, so that I don’t know who cut it but it was there and everybody was using it, the kids. So we would go through the hole and cross the street, and directly across the street was a confectionary store. So we would go buy popsicles or whatever, you know, back and forth. And the Mounties couldn’t see us because the building was built such a way that the windows were always in the front part where the trucks go by… So everyday the traffic is back and forth, and I think the store keeper is doing pretty good business. – Harold Miwa