Why Hastings Park?
The fairgrounds were used for military training in the First World War, 1914-1918. The grounds were expropriated again in 1942 by the Department of National Defense.

Where did they come from?
About 25% of the Japanese Canadian population lived outside of the Vancouver area, in smaller outlying fishing, forestry and mining communities up and down the BC Coast. They were systematically removed from their homes and escorted by the RCMP to Hastings Park.

Who was detained at Hastings Park?
Canadians of Japanese descent were labelled Enemy Aliens, even though 63% were Canadian born and 14% were naturalized citizens. Only 23% were Japanese Nationals.

What could they bring?
Many people were given only 24 hours notice to leave their homes. They were only allowed to carry 1-2 suitcases each (150 lbs per adult, and 75 lbs per child).

Who was in charge?
The BC Security Commission oversaw the uprooting, with the help of RCMP, the BC Provincial Police, the Department of Labour and the Custodian of Enemy Property.

The Internment of Japanese Canadians  日系カナダ人の強制収容

“Hastings Park Manning Pool was a holding pen for human beings. Expropriated in the first week of March, it had been converted from animal to human shelter in only seven days.” – Ann Sunahara

When Canada declared War on Japan on December 8, 1941, almost 22, 000 people of Japanese ancestry were living on the British Columbia coast. Many lived in the Vancouver area, but about 8000 lived in more remote locations up and down the coast.

Almost immediately, there were fears of a Japanese invasion, fanned by sensationalist press and racist beliefs. These fears extended to Japanese Canadians, even though 63% were Canadian born and 14% were naturalized citizens. Only 23% were still Japanese citizens. The government tightened control on the community, by impounding almost 1200 fishing boats and shutting down Japanese newspapers and schools. Japanese male nationals were sent to work camps. All Japanese Canadians were required to register. On 24 February 1942, Prime Minister William Lyon Mackenzie King issued a series of orders-in-council to ‘evacuate’ all persons of Japanese origin to "protective areas." The government started this uprooting with Japanese Canadians living in the outlying areas.

The large exhibition buildings at Hastings Park were empty during the winter, and had previously been used for military purposes during the First World War. Therefore, Hastings Park was selected as a temporary holding camp while more permanent internment camps were being built in the BC interior. The Department of National Defense officially expropriated the fairgrounds for use by the BC Security Commission.

The first group of people arrived on March 16th. On September 1, 1942, at the peak of population, there were 3,866 in the facilities. After that date, large numbers were sent by train daily to the housing projects or work projects across Canada. Hastings Park officially closed at the end of September 1942, although the TB hospital remained open until spring 1943. 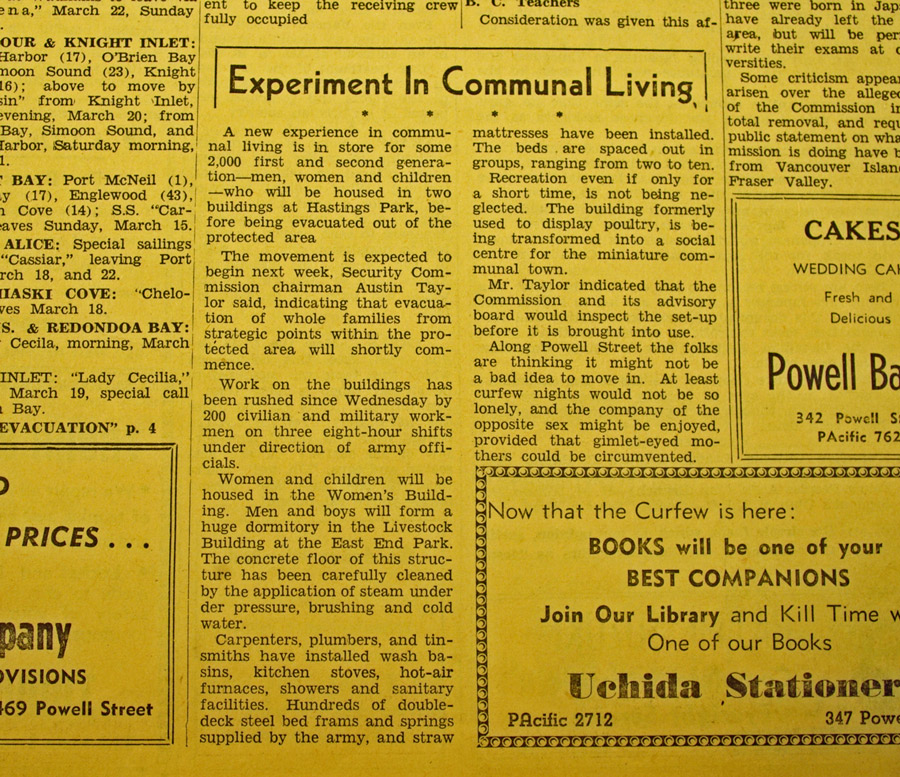 The New Canadian
Read what the New Canadian newspaper had to say during the early days of the uprooting, when Hastings Park was first opened.

The BC Security Commission

In December 1941, the Government of Canada enacted the War Measures Act. The BC Security Commission was created on March 4, 1942 to oversee the internment process, chaired by Austin C. Taylor, a prominent businessman, with a 20 member advisory board. The other two administrators were RCMP Assistant Commissioner Frederick J. Mead, and John Shirras, the Assistant Commissioner of the BC Provincial Police. They were also helped by the Department of Labour. A Custodian of Enemy Property held all land and property in trust, but later sold the confiscated properties without the owner’s consent, and the funds were used to partially cover the costs.

The Final Report on Hastings Park, prepared by the BC Security Commission in 1942? (Please note that the language used in this report reflects the attitudes of the 1940s and may be upsetting to some readers). A copy of the original report is in the Nikkei National Museum collection 1994.69.1.1

A Brief History of Hastings Park

The BC Security Commission removed Japanese Canadians from the 100-mile security zone in three ways: to road camps in BC or Ontario; sugar beet projects in Southern Alberta and Manitoba; or to towns and purpose-built camps in the remote mountain valleys of central BC.

Ten camps were set up in central BC. The largest was a purpose-built camp called Tashme, near Hope, BC. The population in November 1942 was 2,636.

In 1946, community members were given the option to move east of the Rockies or go to Japan. In 1949, after receiving the right to vote, some people did return to BC. In 1988, the Government of Canada made a formal apology and acknowledged the wartime injustices.

In the United States, about 92,000 people of Japanese ancestry were uprooted under Executive Order 9066. They were initially sent to "Assembly Centers" - makeshift concentration camps providing temporary housing. Several of these were in fairgrounds, very similar to Hastings Park. Fifteen emergency camps were set up by the United States army, while more permanent inland concentration camps were being built. Japanese Americans spent an average of three months there before being transferred. According to the army, Assembly Centers were required because of the need for immediate incarceration of Japanese Americans living on the West Coast. For a complete list of these Assembly Centers, and more information about the situation in the United States, click HERE